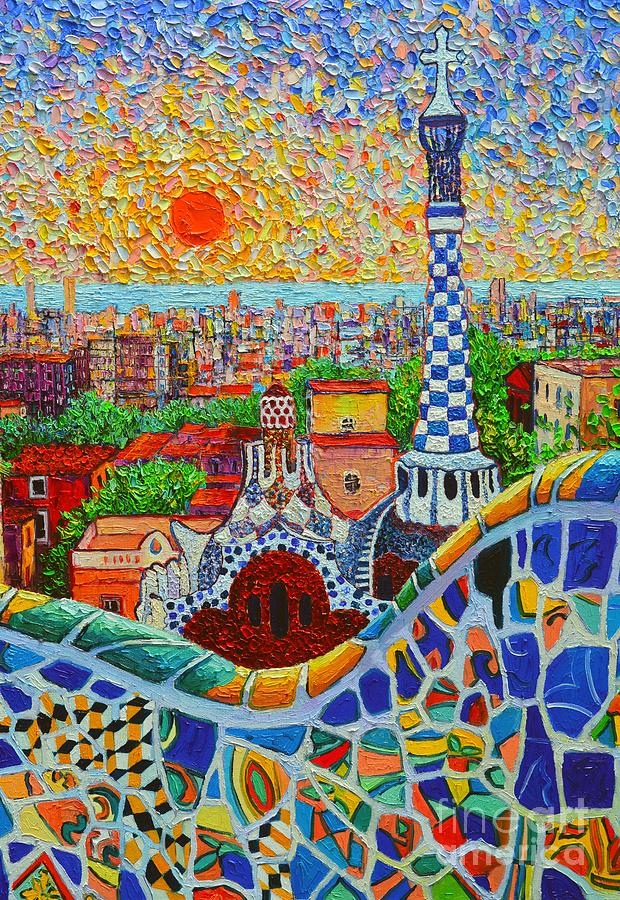 In Barcelona even the sky and the houses look like a mosaic of Gaudi. Since I always have stylized my abstract cityscapes in a manner that remind of a colorful mosaic, in this painting I used a stylistic analogy. In the background I abstracted the city that looks like a colorful mosaic pattern and reply aesthetically the mosaic of the serpentine bench of Gaudi painted in the foreground. Then I paint the sky to look also like a colorful mosaic with myriad of colorful thick oil paint applied with palette knife.

Congrats on your sale of this beautiful artwork, Ana! Lf

Congratulations on your recent sale, Ana!

Congrats on your sale, Ana!💙

This is such an incredible work of art, Ana Maria. It reminds me of a gorgeous vibrant mosaic created in brilliant jewel tones. Merry Christmas and Happy New Year wishes to you and yours, as well.

I love your work! We are planning our first trip to Barcelona in March. I may have visit your site often and purchase one!!! Excellent color and skill.

Thank you very much, Karen. You will love Barcelona. I was there few times and love this amazing city. Especially Park Guell inspired me so many paintings.

Thank you so much to the buyer from Atwell, WA - Australia for purchasing a gorgeous framed print of my Barcelona palette knife oil painting.

Thank you all so much for your wonderful comments and kind congratulations on my sales. Appreciate a lot your support.