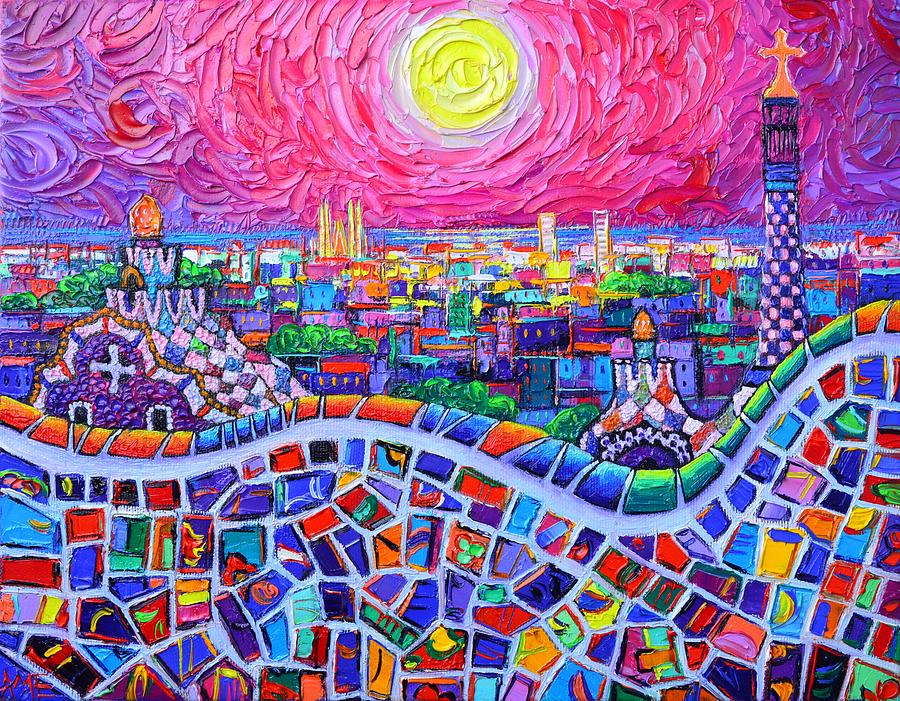 A huge full moon on a bold pink sky and a magical night view of Barcelona from Park Guell.

In Barcelona even the houses look like a mosaic of Gaudi. :) Since I always have stylized my abstract cityscapes in a manner that remind of a colorful mosaic, in all my Barcelona paintings I used a stylistic analogy. In the background I abstracted the city that looks like a colorful mosaic pattern and replies aesthetically the mosaic of the serpentine bench of Gaudi painted in the foreground.

Continuing my series of Barcelona paintings with this work that presents the gorgeous panoramic night view of Barcelona from Park Guell . In the foreground I painted the serpentine mosaic bench of Gaudi, then it can be seen the top of the Casa del Guarda conceived also by Gaudi and, in the distance, on the sea background can be seen the spectacular cathedral Sagrada Familia, lighted, under a huge full moon.


In 2010 I traveled to Barcelona and I was impressed by the unique beauty of this city. The richness of the colors, the incredible Gaudi architecture. One of the moments I'll never forget was when I saw the entire Barcelona panoramic view from Park Guell.

The large cross at the Park's high-point offers the most complete view of Barcelona and the bay. It is possible to view the main city in panorama, with the Sagrada Fam�lia and the Montju�c area visible at a distance.'' ( wiki )

I love your style and glorious colors.

Wonderful work! Love the colours and the texture! Beautiful Painting!

What a marvelous painting Ana

Thank you very much to the buyer from Wildwood, MO - United States for your purchase.

Thank you all so much for the wonderful comments on my Barcelona painting, my friends. Appreciate a lot.

Wow! This is spectacular! I love everything about it! This is truly one of my all time favorite paintings! It must be inspired by Van Gogh. I love how you can see all the brush strokes, the vibrant colors, and the wall that seems to be covered in beautiful tiles. This painting is full of life! L/F/Tweeted/Pinned/shared on Facebook

The colors are very appealing!!

Ahh, Ana.. how beautiful all of these works are~ totally gorgeous in color, design and everything else as well! ...

So colorful and lovely

This is such a stunning work, Ana Maria! Love everything about it. Your use of color and texture is masterful. L/F And congratulations on your sale!

Dear Ana Maria, your work as always is so impressive I love your colors and textures, this is Amazing as always beautiful!! Have a wonderful New Year !! lfv :-)

What a Delicious Masterpiece you've have created here Very detailed and Excellent Executed! 💫 I wish you a Happy 2019 💫 ~ Sincerely Cia ~

Now this looks like a city that never sleeps! Such joy! As always such beautiful work, Ana! Happy New Year to you! . . . vf

like a vision Ana!! love everything about this fantastic piece fl

Ana Maria, this is so gorgeous. LF Wish you and all your family a Merry Christmas. Happy Holidays and a Happy New Year !

congrats on your wonderful sale!