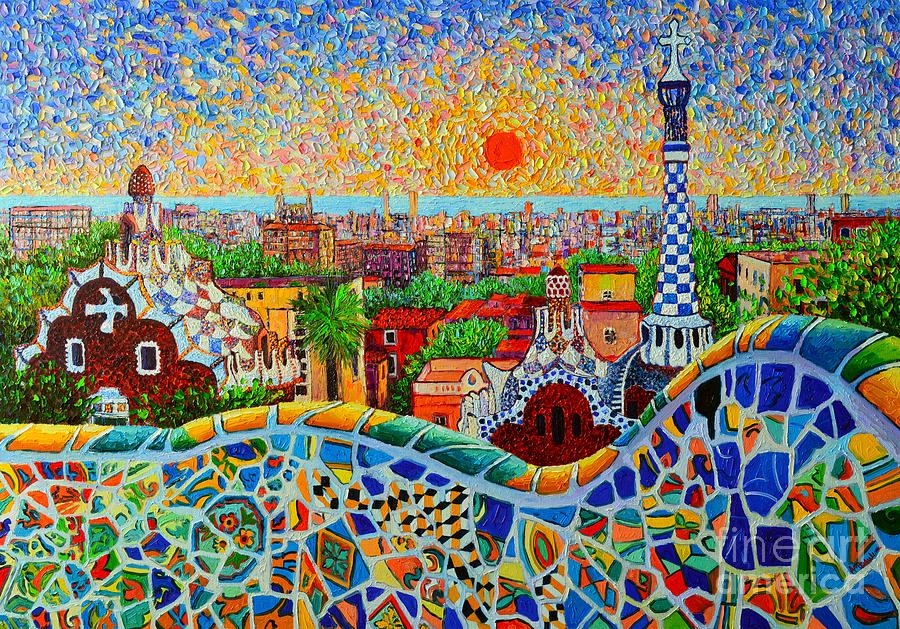 In Barcelona even the sky and the houses look like a mosaic of Gaudi. Since I always have stylized my abstract cityscapes in a manner that remind of a colorful mosaic, in this painting I used a stylistic analogy. In the background I abstracted the city that looks like a colorful mosaic pattern and reply aesthetically the mosaic of the serpentine bench of Gaudi painted in the foreground. Then I paint the sky to look also like a colorful mosaic with myriad of colorful thick oil paint applied with palette knife.

THE ORIGINAL PAINTING IS SOLD TO AN ART COLLECTOR FROM FLORIDA, U.S.A.

PRINTS AND CARDS ARE AVAILABLE FOR SALE.

47,000 views! So well deserved. No one paints this subject like you. If architecture has a personality, you have discovered how to extract and project it.

Congratulations on your sale!!

Amazing artwork, congratulations on your sale!

Congratulations on your and beautiful colors

Congratulations on your sale of this wonderful artwork! F/L

Congratulations on your sale of this amazing painting!

A wonderful presentation of one of my favorite architects/artists. LF

Ana Maria, this is absolutely beautiful ~ stunning colors, details and composition! Congratulations on your sale! F/L

Congratulations on your sale! Great art!

Congratulations on your sale of this wonderful artwork! F/L

Art is unquestionably one of the purest and highest elements in human happiness. It trains the mind through the eye, and the eye through the mind. As the sun colours flowers, so does art colour life. ― John Lubbock CONGRATULATIONS ON SALE!

Congratulations on your well deserved sale!