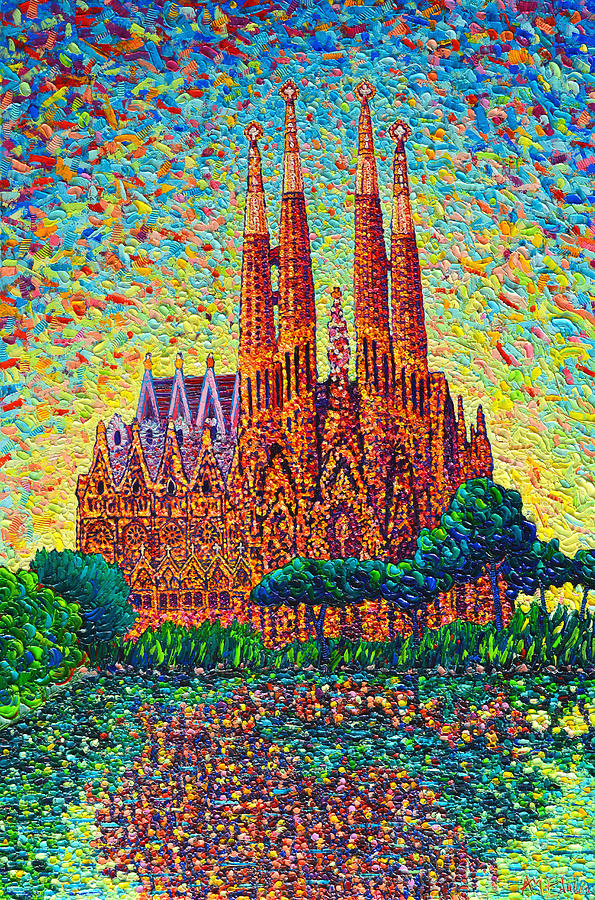 I traveled to Barcelona and I was impressed by Sagrada Familia. It's architectural style has been called ''warped Gothic''. The rippling contours of the stone facade make it look as though Sagrada Familia is melting in the sun,while the towers are topped with brightly-colored mosaic. Gaudi believed that color is life. Perhaps that's why I personally admire so much his amazing creations.

The story of this painting is quite unusual. I started this work back in 2011, but it stayed unfinished in the studio till few months ago when I finally finished it. :)

'' Describing Sagrada Familia, art critic Rainer Zerbst said >.
The Basilica and Expiatory Church of the Holy Family, commonly known as Sagrada Familia, is a large Roman Catholic church in Barcelona, Catalonia, Spain, designed by Catalan architect Antoni Gaudi ( 1852 - 1926 ). Although incomplete, the church is a UNESCO World Heritage Site. Thought construction of Sagrada Familia had commenced in 1882, Gaudi became involved in 1883, taking over the project and transforming it with his architectural and engineering style - combining Gothic and curvilinear Art Nouveau forms.
Gaudi devoted his last years to the project, and at the time of his death, in 1926, less than a quarter of the project was complete. Sagrada Familia's construction progressed slowly, as it relied on private donations and was interrupted by the Spanish Civil War. Construction passed the midpoint in 2010 with some of the project's greatest challenges remaining and an anticipated completation date of 2026 - the centennial of Gaudi's death. '' ( Wiki )

The original is no longer available, has been sold to an art collector from Ellicott City, MD, U.S.A.

Well done! Congratulations on your sale!

Wow, this is so spectacular painting, dear Ana. Love love it! FL

such exquisite work Ana!! such beautiful use of colours so rich and so vibrant and a joy to view!! another excellent piece!! tweet! Happy New Year my friend am such a fan

Thank you so much to the buyer from Wexford, PA - United States for purchasing a gorgeously matted and framed print of ''Sagrada Familia Barcelona...'' painting. Wish you to enjoy it for many years to come.

Congrats Ana on your sale!

Thank you very much, Leanne.

Congratulations, Ana Maria on this sale!!! This is so beautiful!

Thank you very much, Nancy.

Congrats on your new sale Ana! :)

Thank you very much, Ramona. :)

Thank you all so much for your appreciation and for your wonderful comments on my ''Sagrada Familia...'' painting.

Beautiful texture and composition, Congratulations on your sale!

Only You can bring such a subject to life, Ana Maria. Bravo.

Wow dear Ana Maria your work is so amazing !! Love to visit your Amazing Gallery you are a magnificent Artist!! Hope you have a great week!! lfv :-)