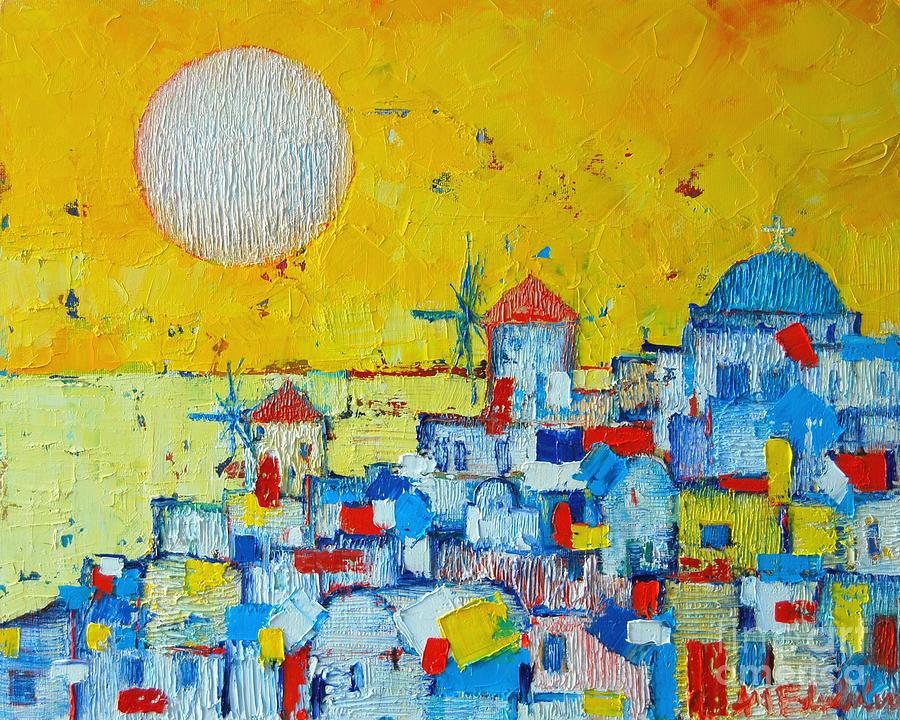 THE ORIGINAL PAINTING HAS BEEN ALREADY SOLD TO AN ART COLLECTOR FROM AUSTRALIA.
PRINTS AND CARDS ARE AVAILABLE FOR SALE.

This palette knife oil painting is part of my series ''Abstract cityscapes''. I started this series of abstract cities in 2012 and from then it is a recurrent theme for me. I love to paint abstract cityscapes under bold, vivid, sometimes tormented skies - yellow, pink, purple, orange, red, blue, turquoise, even green skies, sometimes skies ''inhabited'' by huge sun or full moon...


In 2010 I spend my summer vacation in Santorini. From then I was definitively in love with this splendid Greek island.

One can feel the warm sun filled atmosphere in this work. Pure sunlight energy converted into paint and delivered to the soul.

Congrats on your sale, dear Ana!

Congratulations on your sale! :)

Thank you to the buyer from Pacific Palisades, CA - United States.

There is such fabulous elegance in this one, and so much vibrancy! I love going through your gallery, taking a portion of happiness, unique colors !

Sold a gorgeous 30" x 24" Framed Print of Abstract Santorini - Oia Before Sunset. I am very grateful  to the buyer from Palos Heights, IL - United States

Thank you all very much for your kind congratulations on my sales of Abstract Santorini.

Congratulations on your sale of this wonderful artwork! Fl

Congrats on your sale! Love the colors! L/F

Congratulations on your beautiful sale.

Thank you very much to the buyer from Decatur, AL - United States.

Congratulations on your sale Ana Maria!

Thank you so much to the buyer from Rochester, MN - United States who purchased a gorgeous large canvas print of my abstract cityscape Abstract Santorini - Oia Before Sunset palette knife oil painting.

Thank you so much to the buyer from Manalapan, NJ - United States for purchasing a beautiful framed and matted print of my Abstract Santorini - Oia Before Sunset palette knife oil painting.

Thanks a lot, Sunil.

Thanks very much, dear Melly.

Thank you so much to the buyer from London, United Kingdom who purchase and wonderful framed and matted print of my Abstract Santorini Oia sunset painting.