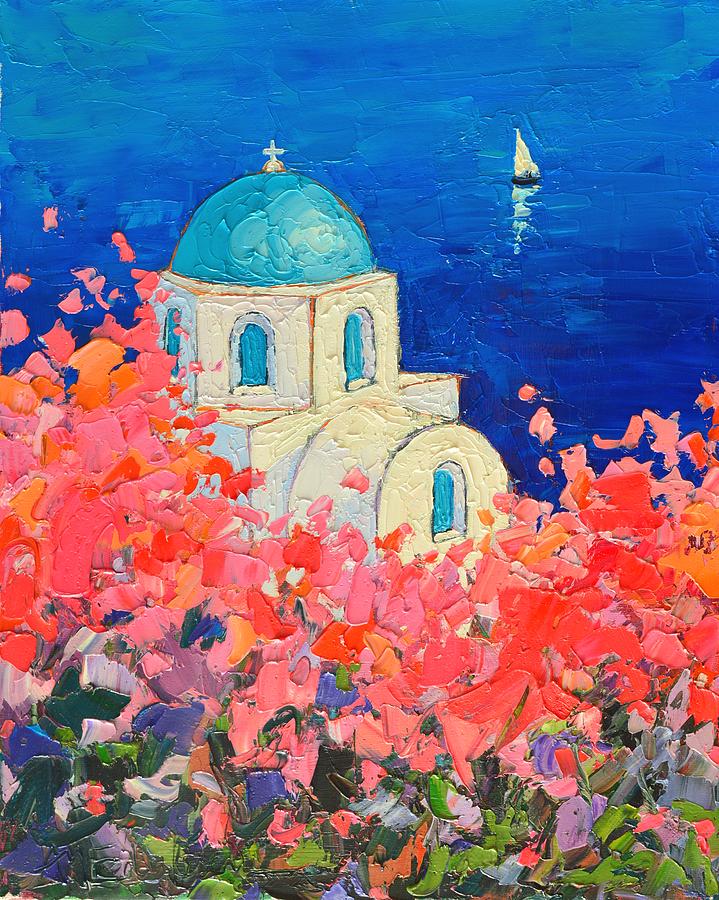 n 2010 I spend my summer vacation in Santorini. From then I was definitively in love with this splendid Greek island.

Your knife work is in and of itself a "work of art", lovely, Mary

Sold a 19.125" x 24.000" gorgeously framed print of my textural impasto palette knife oil painting from 2014 entitled Santorini Impression - Full Bloom In Santorini Greece. Thank you so much to the buyer from Sugar Land, TX - United States.

Congratulations on your recent sale!

Congratulations on your new sale

Thank you very much, Jon.

Thank you so much, Beverly. Blessings to you.

This is another example of uplifting artwork. I am envious of the owner of this gem. That water and the way that boat sits out there on it is amazing.

Thank you so much, Bob. Appreciate a lot.

Congrats Ana Maria,on the sale of this fabulous creation! L/F

Congratulations, Ana, on the sale of your very beautiful oil painting!! F&L&G+!!

So beautiful, and such a great painting style ! LF

Oh yes, it had to be Santorini - marvellous painting! L/F

This is stunning, dear Ana Maria!!! Gorgeous composition and such a beautiful romantic mood!!!! I love it!!! :)))vf

Thank you all very much for your wonderful comments. Appreciate a lot your support.

Such a beautiful image, Ana! It brings back memories!

Beautiful!! Congratulations on your feature in The Gallery Wall for the weekly theme Faith!

Congratulations on your feature in the gallery wall.