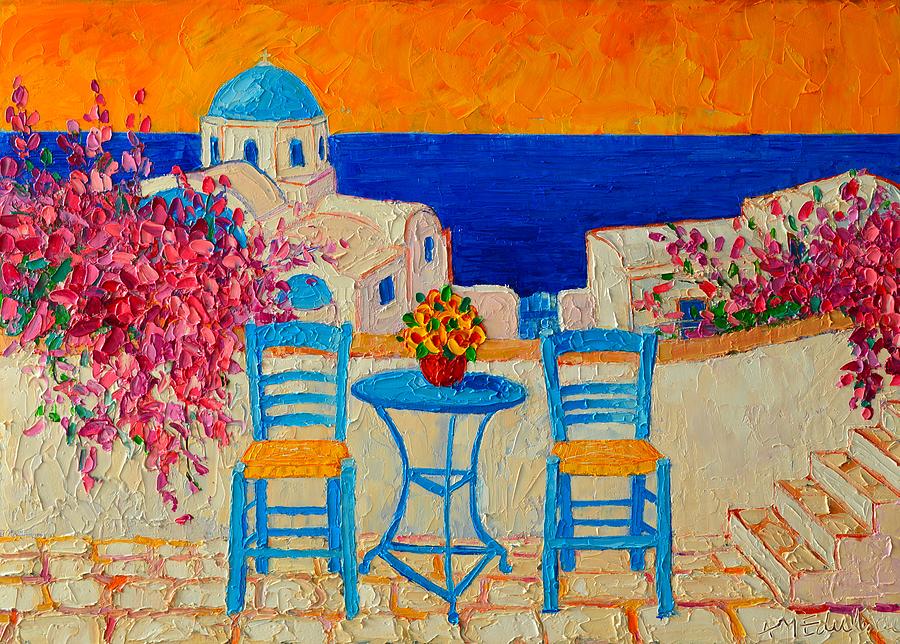 Table For Two In Santorini Greece

Table For Two In Santorini Greece

The original painting is sold to an art collector form PA, U.S.A.

In 2010 I spend my summer vacation in Santorini. From then I was definitively in love with this splendid Greek island.

Soooo Good Ana Maria! I'm amazed every time I look at your work...and wonder how you would depit the mountains of Colorado! F/V

Sold a Throw Pillow - 14" x 14" of Table For Two In Santorini Greece. Thank you very much to the to a buyer from Oyster Bay, NY - United States.

Gorgeous, congrats on our sale!

Thanks a lot, Kate.

I am so grateful to the buyer from from Spartanburg, SC - United States who purchased today 4 beautiful prints of my Barcelona and Santorini paintings. One of them is after my palette knife oil painting ''Table For Two In Santorini Greece''.

Congrats on your sale

Thank you very much, Fiona.

Love this one Ana Maria! Beautiful as one could ever hope! Well done. FAVORITE!

Thanks so much, Reynold.

Ones again I miss Santorini Ana ,as you know I love so much Paros and Antiparos islands aswell ,I hope still we meet there Ana in the future my on my 2 little islands from my little movies you saw .-)

Totally inviting, Ana! As always...I love your colors and textures. Your subjects are beautifully thought out, too. f/l

Cynthia, Kume, Jacqueline, Laurie and Mary, thank you all so much.

Oh, Ana Maria, this is such a delightful painting. Love the way you capture the warm sunlight and how beautifully your colors glow. You have such a wonderful talent for painting. L/F

Revisiting this stunning painting, dear Ana Maria!!! It is absolutely breathtaking!!!! I LOVE it!!!! :)))vf

Surprise & Congratulations!! Your photo has been featured on The Art Shoppe Cafe group homepage! Thank you for sharing your beautiful work with us! F/L 12.13.15

Wow!! So beautiful sitting arrangement!! You have created a great atmosphere. Wonderful style and very pleasing colors in this lovely work. L/F

Thank you very much, Anand.

Thank you very much, Stephen.

Congratulations, your artwork is being featured in the FAA group “Modern Art”.

Thank you very much, Barney.

Ah yes, one my all time favorites. How fortunate some art collector is to see this work "in person" each day. Superb!!!

Bob, thank you so much.

Wow Ana this is such a lovely setting!! Your great work with the knife is so amazing!! I love the colors!! L/P/F

Thank you very much, Marvin.

Your work is charming and inviting. I love the brushwork and color combinations as well as the charming composition.

Thank you very much, Linda.

Thanks a lot, Donna.

Congrats on Your Sale!!!....This is Fabulous

Thanks a lot, Beverly.

A gorgeous scene of a beautiful Mediterranean island; I'd love to sit here now! :))

This is one of my all time favorite paintings Ana. It has an inviting appeal, really charming. The color harmony and painterly quality is just superb.

Bob, thank you so much.