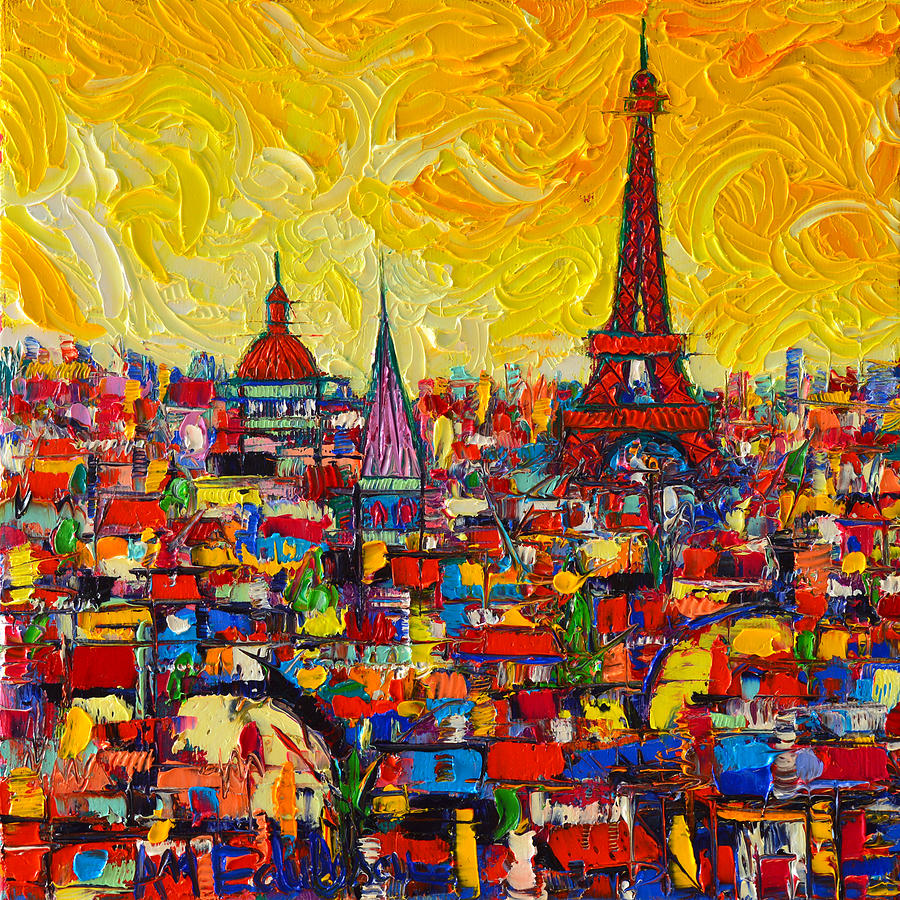 This palette knife oil painting is part of my series ''Abstract cityscapes''. I started this series of abstract cities years ago and it is a recurrent theme for me. I love to paint abstract cityscapes under bold, vivid, sometimes tormented skies - yellow, pink, purple, orange, red, blue, turquoise, even green skies, sometimes skies ''inhabited'' by huge sun or full moon...

In general I prefer to stylize the architectonic details of the houses. I paint mostly abstract cityscapes, as my main goal is to deconstruct the real architectonic shapes ( than to render them exactly as in reality) and to translate them practically in differently morphed color spots interacting with each other in various ways for generate the painterly quality of the textures, that I love so much.

The original is no longer available, has been sold to an art collector from Ellicott City, MD, U.S.A.

Paris (English pronunciation: /ˈp�rɪs/, i/ˈpɛrɪs/; French pronunciation: [paʁi]) is the capital and largest city of France. It is situated on the river Seine, in northern France, at the heart of the �le-de-France region. The city of Paris, within its administrative limits (the 20 arrondissements), has a population of about 2,230,000. Its metropolitan area is one of the largest population centres in Europe, with more than 12 million inhabitants.
An important settlement for more than two millennia, Paris had become, by the 12th century, one of Europe's foremost centres of learning and the arts and the largest city in the Western world until the turn of the 18th century. Paris is today one of the world's leading business and cultural centres and its influences in politics, education, entertainment, media, science, and the arts all contribute to its status as one of the world's major global cities.
The Eiffel Tower (French: La Tour Eiffel, [tuʁ ɛfɛl]) is an iron[10] lattice tower located on the Champ de Mars in Paris, named after the engineer Gustave Eiffel, whose company designed and built the tower. Erected in 1889 as the entrance arch to the 1889 World's Fair, it has become both a global cultural icon of France and one of the most recognizable structures in the world. The tower is the tallest structure in Paris[11] and the most-visited paid monument in the world; 7.1 million people ascended it in 2011. The third level observatory's upper platform is at 279.11 m the highest accessible to public in the European Union and the highest in Europe as long as the platform of the Ostankino Tower, at 360 m, remains closed as a result of the fire of August 2000. The tower received its 250 millionth visitor in 2010.
The tower stands 320 metres (1,050 ft) tall, about the same height as an 81-storey building. During its construction, the Eiffel Tower surpassed the Washington Monument to assume the title of the tallest man-made structure in the world, a title it held for 41 years, until the Chrysler Building in New York City was built in 1930. However, because of the addition, in 1957, of the antenna atop the Eiffel Tower, it is now taller than the Chrysler Building. Not including broadcast antennas, it is the second-tallest structure in France, after the Millau Viaduct.
The tower has three levels for visitors. Tickets can be purchased to ascend, by stairs or lift (elevator), to the first and second levels. The walk from ground level to the first level is over 300 steps, as is the walk from the first to the second level. The third and highest level is accessible only by lift - stairs exist but they are not usually open for public use. Both the first and second levels feature restaurants.
The tower has become the most prominent symbol of both Paris and France, often in the establishing shot of films set in the city. ( wiki )

Beautiful work and congratulations on your recent sale!!

Well done on your recent sale.

Paris abstract cityscape sold as a cool puzzle. Thank you very much to the buyer from La Canada, Flintridge, CA, U.S.

Thank you all very much for your wonderful comments on my Paris abstract cityscape.

A world full of sun. A city bathed in the light. Very nice! f/l

CONGRATULATIONS! Your fabulous work is featured on the Positive group Home page. You are invited to embed the work's code to our Featured Images Archive thread. Your Positive Administrator

Revisiting a favorite. Congratulations on your sale, too. F/L

I'm so enjoying your color filled gallery, Ana Maria! another vote from me. Vote/like

This is a amazing work! I love the vibrant strong colors! Adore your work Alot!! L/F

Thank you so very much to the buyer from Melbourne, Victoria - Australia who purchased 4 wonderfully framed and matted prints of my abstract cityscapes, one of my Vibrant Paris palette knife painting.

Congrats, Ana! Every piece by you is truly a work of art and a treasure for anyone who gets to own one!

Thank you very much, Karen.

Congratulations on your recent sale!!

Congrats on Sale!! what a Fabulous Painting

Thanks very much, Beverly.

There are some paintings I just can't leave alone, and this is one Ana! I am the moth to the flame.

Haha, you made me laugh, Bob. I had to search translate for moth ... Thank you so much, my friend. I feel the same for your paintings ... your Sienese roofs are flame for the moth I am.