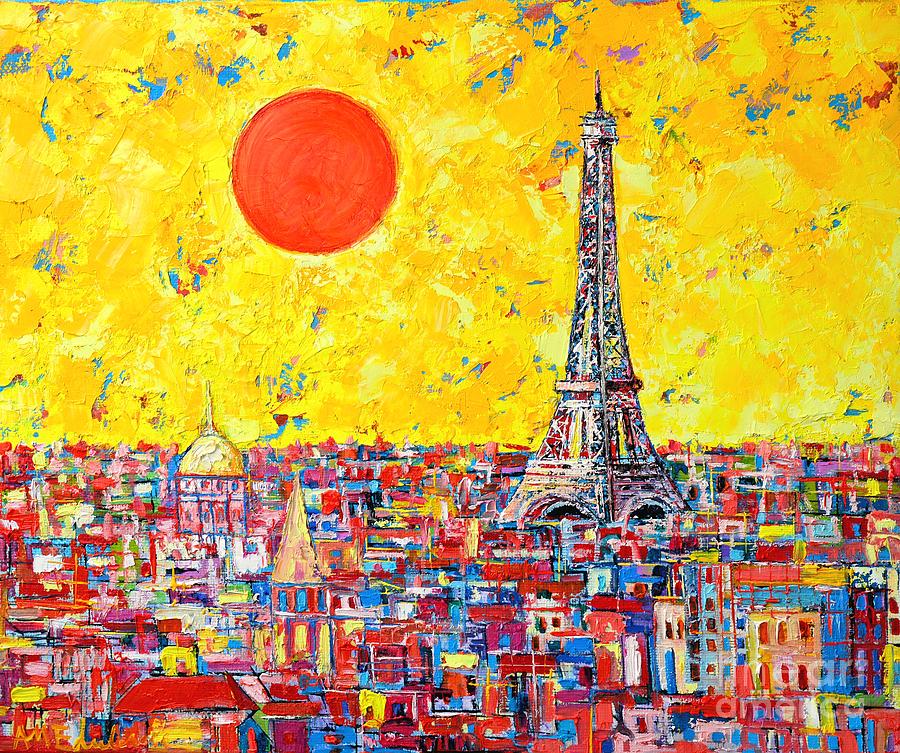 This Paris Abstract Cityscape I painted last year, in 2012, along with my Barcelona Abstract Cityscapes I already posted.This palette knife painting captures the Abstract City Patterns of Paris and it was inspired by the Paris west view seen from the tower of Notre-Dame.
...
PARIS IN SUNLIGHT is part of my series Abstract Cityscapes. I started this series of abstract cities years ago and it is a recurrent theme for me. Always my eyes are haunted by Abstract City Patterns. Everywhere I wandered, always I seek for panoramic views of the cities in which I am able to observe what I call the Abstract City Patterns. The rhythm of the rooftops seen from the distance fascinates me. In my personal artistic vision the architectonic details create practically an aesthetic abstract pattern, that urges to be translated in differently morphed palette knife strokes and marks interacting with each other in various ways and generating the painterly quality of the impasto textures that I love so much.
I love to paint abstract cityscapes under bold, vivid, sometimes tormented skies - yellow, pink, purple, orange, red, blue, turquoise, even green skies, sometimes skies ''inhabited'' by huge sun or full moon...


THE ORIGINAL IS SOLD TO AN ART COLLECTOR FROM TEXAS, U.S.A. PRINTS AND CARDS ARE AVAILABLE FOR SALE.
ORIGINAL OIL PAINTING, SIZES : HEIGHT - 24'', WIDTH - 20'', DEPTH - 1''
Paris (English pronunciation: /ˈp�rɪs/, i/ˈpɛrɪs/; French pronunciation: [paʁi]) is the capital and largest city of France. It is situated on the river Seine, in northern France, at the heart of the �le-de-France region. The city of Paris, within its administrative limits (the 20 arrondissements), has a population of about 2,230,000. Its metropolitan area is one of the largest population centres in Europe, with more than 12 million inhabitants.
An important settlement for more than two millennia, Paris had become, by the 12th century, one of Europe's foremost centres of learning and the arts and the largest city in the Western world until the turn of the 18th century. Paris is today one of the world's leading business and cultural centres and its influences in politics, education, entertainment, media, science, and the arts all contribute to its status as one of the world's major global cities.
The Eiffel Tower (French: La Tour Eiffel, [tuʁ ɛfɛl]) is an iron[10] lattice tower located on the Champ de Mars in Paris, named after the engineer Gustave Eiffel, whose company designed and built the tower. Erected in 1889 as the entrance arch to the 1889 World's Fair, it has become both a global cultural icon of France and one of the most recognizable structures in the world. The tower is the tallest structure in Paris[11] and the most-visited paid monument in the world; 7.1 million people ascended it in 2011. The third level observatory's upper platform is at 279.11 m the highest accessible to public in the European Union and the highest in Europe as long as the platform of the Ostankino Tower, at 360 m, remains closed as a result of the fire of August 2000. The tower received its 250 millionth visitor in 2010.
The tower stands 320 metres (1,050 ft) tall, about the same height as an 81-storey building. During its construction, the Eiffel Tower surpassed the Washington Monument to assume the title of the tallest man-made structure in the world, a title it held for 41 years, until the Chrysler Building in New York City was built in 1930. However, because of the addition, in 1957, of the antenna atop the Eiffel Tower, it is now taller than the Chrysler Building. Not including broadcast antennas, it is the second-tallest structure in France, after the Millau Viaduct.
The tower has three levels for visitors. Tickets can be purchased to ascend, by stairs or lift (elevator), to the first and second levels. The walk from ground level to the first level is over 300 steps, as is the walk from the first to the second level. The third and highest level is accessible only by lift - stairs exist but they are not usually open for public use. Both the first and second levels feature restaurants.
The tower has become the most prominent symbol of both Paris and France, often in the establishing shot of films set in the city.
( Wikipedia )

Congratulations Ana Maria, For your special feature on the homepage of "Exclusively Drawings and Paintings"!

Congratulations your wonderful work is now featured on Artist Salon 1! Please add your work to our Discussion archive for features.

Congratulations!! This stunning image has been selected to be featured for the week in the “Art for Ever with You” Group Home Page. You are welcome to add a preview of this featured image to the group’s discussion post titled “2019 June: Stunning Group Featured Images and Thank-you’s” for a permanent display within the group, to share this achievement with others. Also feel free to post your feature on our group Facebook page: https://www.facebook.com/groups/296998814248643/ Thank you for your participation in the group! ~Jan (June 18, 2019)

Congratulations - Your beautiful picture has been featured in the "Travel Art" group! For further promotion, you can post it to the specific Travel Destinations galleries, our Facebook group and our Pinterest board - all the links are provided on our group's homepage: https://fineartamerica.com/groups/1-travel-art.html * You are also invited to post it to our group's blog: travelartpix.com for worldwide exposure!

One of your peers nominated this image in the 1000 views Groups nominated images by your fellow artist in the Special Features #11 promotion discussion. Please visit and pass on the love to another artist.

beautiful work! nominated for a feature in the 1000 views group

Congratulations, your work is featured on the homepage of "Created by My Hands"

A brilliant painting of Paris! So beautiful. I do like the palette knife texture. LF and nominating for a special feature in the 1000 Views group.

Another amazing colourful and textured painting of Paris, love it! L/F and my fav in WPG.

I love the texture and old world feeling that you have created with this fantastic painting, Ana!

Wonderful painting ...as all of them in your colourful and textured style. Love it! L/F

Ana, Congratulations on your new Sale!!...L

Congrats on your sale Ana!!!

Congratulations Ana Maria on your sale !

Such a happy Oil Ana! Love it and congrats on your special feature in the Gallery Wall!

Congrats on your special feature in the Gallery Wall collective series. I know a winner when I see one!