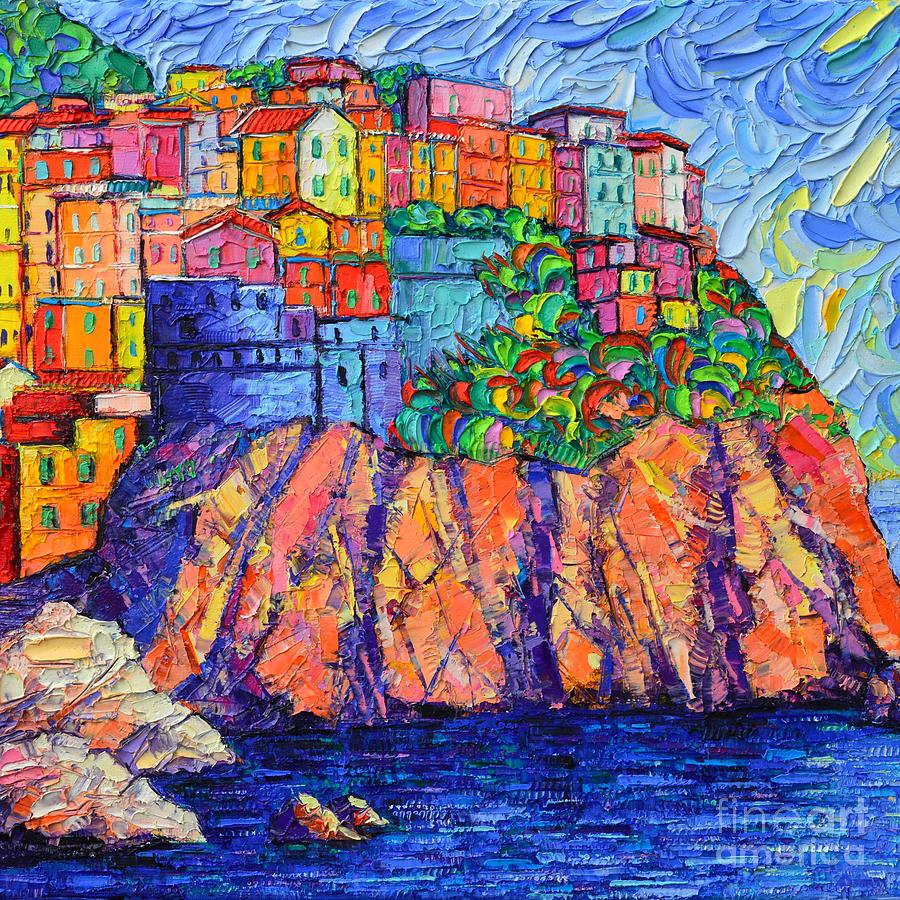 This is a cropped detail on square format from my original oil painting '' MANAROLA CINQUE TERRE ITALY''.

Manarola (Manaea in the local dialect) is a small town, a frazione of the comune (municipality) of Riomaggiore, in the province of La Spezia, Liguria, northern Italy. It is the second smallest of the famous Cinque Terre towns frequented by tourists.
Manarola may be the oldest of the towns in the Cinque Terre, with the cornerstone of the church, San Lorenzo, dating from 1338. The local dialect is Manarolese, which is marginally different from the dialects in the nearby area. The name "Manarola" is probably dialectical evolution of the Latin, "magna rota". In the Manarolese dialect this was changed to "magna roea" which means "large wheel", in reference to the mill wheel in the town.
Manarola's primary industries have traditionally been fishing and wine-making. The local wine, called Sciacchetr�, is especially renowned; references from Roman writings mention the high quality of the wine produced in the region. In recent years, Manarola and its neighboring towns have become popular tourist destinations, particularly in the summer months. Tourist attractions in the region include a famous walking trail between Manarola and Riomaggiore (called Via dell'Amore, "Love's Trail") and hiking trails in the hills and vineyards above the town. Manarola is one of the five villages. Mostly all of the houses are bright and colourful. (source : Wikipedia )

Thank you so much to the buyer from Los Angeles, CA - United States for purchasing a wonderful canvas print of my Manarola painting.

Very nice - Congratulations on your sale!

Excellent as always, congratulations on your sale!

Fabulous......Congrats on your sale, Ana Maria!

Congrats Ana on your sale! f/l

Congratulations on your Sale

Thank you so much to the buyer from Boulder, CO - United States.

Thank you very much to the buyer from Denver, CO - United States.

Congrats on your sale, Ana!

Ana, Congratulations on your new Sale!...L

Thanks very much, Chris.

Thanks a lot, Shirley.

Thanks very much, Christina.