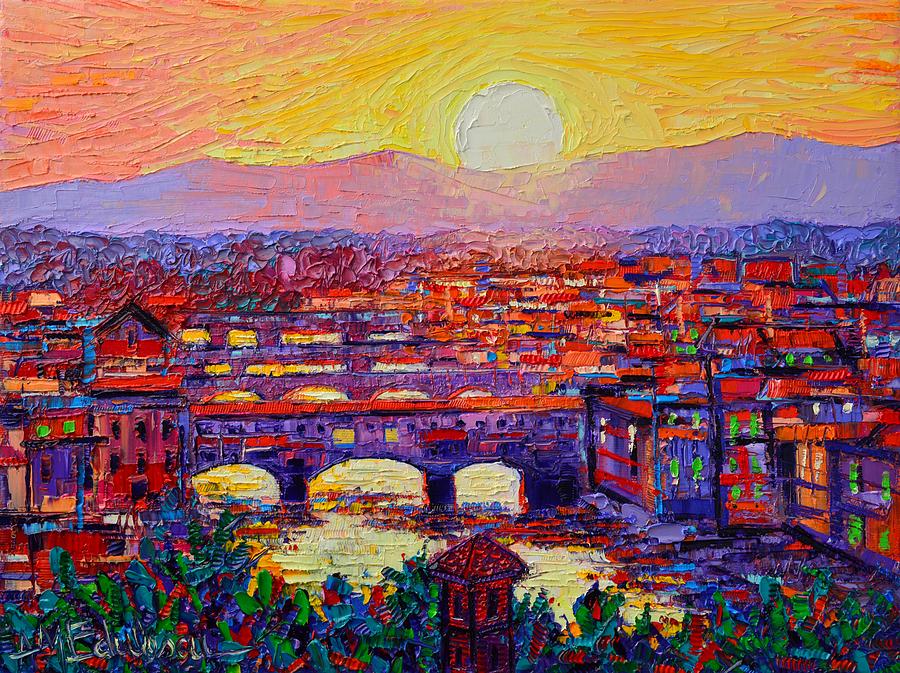 This palette knife oil painting is part of my series ''Abstract cityscapes''. I started this series of abstract cities years ago and it is a recurrent theme for me. I love to paint abstract cityscapes under bold, vivid, sometimes tormented skies - yellow, pink, purple, orange, red, blue, turquoise, even green skies, sometimes skies ''inhabited'' by huge sun or full moon...

In general I prefer to stylize the architectonic details of the houses. I paint mostly abstract cityscapes, as my main goal is to deconstruct the real architectonic shapes ( than to render them exactly as in reality) and to translate them practically in differently morphed color spots interacting with each other in various ways for generate the painterly quality of the textures, that I love so much.


The original painting has been sold to an art collector from Mililani, Hawaii, U.S.
Prints and other products are available for sale.


''Florence is the capital city of the Italian region of Tuscany and of the province of Florence. It is the most populous city in Tuscany, with approximately 380,000 inhabitants, expanding to over 1,520,000 in the metropolitan area.

Florence is famous for its history: a centre of medieval European trade and finance and one of the wealthiest cities of the time, it is considered the birthplace of the Renaissance, and has been called "the Athens of the Middle Ages". A turbulent political history includes periods of rule by the powerful Medici family, and numerous religious and republican revolutions. From 1865 to 1871 the city was the capital of the recently established Kingdom of Italy.

The Ponte Vecchio ("Old Bridge", Italian pronunciation: [ˈponte ˈvɛkkjo]) is a medieval stone closed-spandrel segmental arch bridge over the Arno River, in Florence, Italy, noted for still having shops built along it, as was once common. Butchers initially occupied the shops; the present tenants are jewelers, art dealers and souvenir sellers. The Ponte Vecchio's two neighbouring bridges are the Ponte Santa Trinita and the Ponte alle Grazie. The bridge spans the Arno at its narrowest point where it is believed that a bridge was first built in Roman times, when the via Cassia crossed the river at this point.

The Historic Centre of Florence attracts millions of tourists each year, and Euromonitor International ranked the city as the world's 89th most visited in 2012, with 1.8 million visitors. It was declared a World Heritage Site by UNESCO in 1982. The city is noted for its culture, Renaissance art and architecture and monuments. The city also contains numerous museums and art galleries, such as the Uffizi Gallery and the Palazzo Pitti, and still exerts an influence in the fields of art, culture and politics. Due to Florence's artistic and architectural heritage, it has been ranked by Forbes as one of the most beautiful cities in the world.

Florence is an important city in Italian fashion, being ranked in the top 51 fashion capitals of the world; furthermore, it is a major national economic centre, as a tourist and industrial hub. In 2008, the city had the 17th highest average income in Italy.'' (wiki)

Congrats on Your Sale!!

Happy New Year Ana! I picked this marvelous sunset from so many of your bold beautuful works to remind me of my stay in Florence too. A small hotel by the bridge was my cultural oasis for a couple of days. Thank you for bringing back that memory in the middle of a tough time for all of us. LF

Thank you so very much , Alec. Appreciate a lot. Wish you and Barbara a happy and healthy new year.

Nice & Congrats on your sale :)

Congrats on another sale!!

So beautiful, Ana! I could look at your work all day long! This brings back such great memories of a college quarter spent living in Florence! . . . . .fv

This is wow gorgeous! Your gallery of works Ana is just exquisite, every painting a feast for the eyes. I love how all your work coordinates wonderfully through your color palette, texture and style! lvf

Bravo on your latest sale.

Congrats on your recent sale, Ana! :)

Congrats on Your Sale!!...Beautiful Blessing.

Gorgeous, congrats on your sale!

Beautiful painting of this beautiful city!

Love this Ana,it really looks like a picture I seen in a movie. Love it! A Fave!! Hope you are well and happy!!! Dear friend,Marsha FV

Beautiful work!!! Your image is featured in the Art Lovers Celebrating Color group!!!

This one feels like a new discovery each time I view it. I love the subject, but it is your ability to coax the personality of Florence out into full bloom that makes this work special. That calming blue pink cream mountain in the background and the soft warm sky is the perfect compliment to the energy of the bridge and surrounding buildings. What a painting.

Bob, thank you so very much for such wonderful words. Your paintings of Florence are superb and definitely you are the master of this subject.