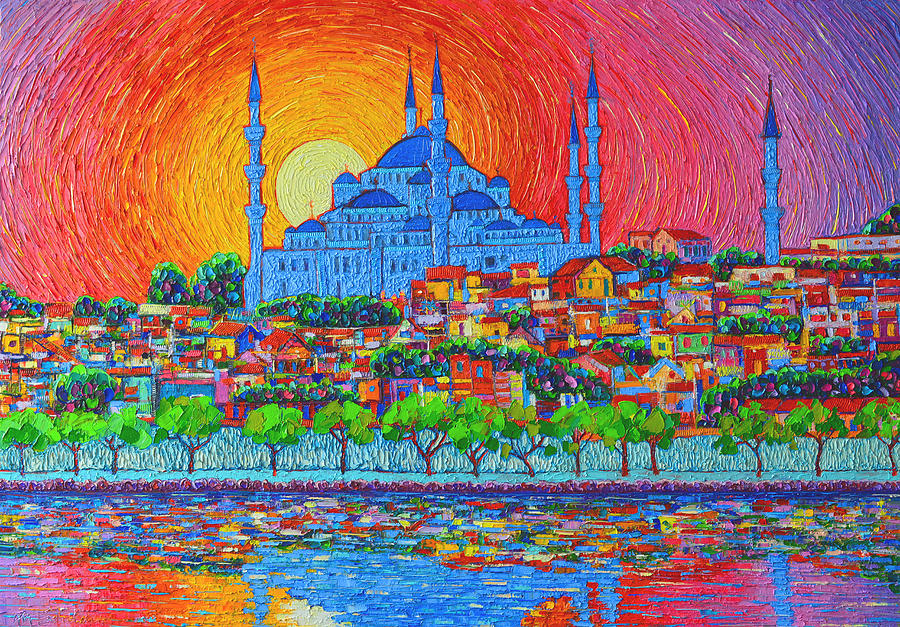 This palette knife oil painting is part of my series ''Abstract cityscapes''. I started this series of abstract cities in 2012 and from then it is a recurrent theme for me. I love to paint abstract cityscapes under bold, vivid, sometimes tormented skies - yellow, pink, purple, orange, red, blue, turquoise, even green skies, sometimes skies ''inhabited'' by huge sun or full moon...


''Istanbul (/ˌɪst�nˈbʊl/; Turkish: İstanbul [isˈtanbuɫ] , once known as Constantinople, is the most populous city in Turkey, and the country's economic, cultural, and historical center. Istanbul is a transcontinental city in Eurasia, straddling the Bosphorus strait between the Sea of Marmara and the Black Sea. Its commercial and historical center lies on the European side and about a third of its population lives on the Asian side. The city is the administrative center of the Istanbul Metropolitan Municipality (coterminous with Istanbul Province), both hosting a population of around 14 million residents. Istanbul is one of the world's most populous cities and ranks as world's 5th-largest city proper and the largest European city.

Founded on the Sarayburnu promontory around 660 BCE as Byzantium, the city now known as Istanbul developed to become one of the most significant cities in history. For nearly sixteen centuries following its reestablishment as Constantinople (Greek: Κωνσταντινούπολις Konstantino�polis; Latin: Constantinopolis) or New Rome (Greek: Νέα Ῥώμη, Nea Romē; Latin: Nova Roma) in 330 CE, it served as an imperial capital for the Roman and Byzantine (330�1204 and 1261�1453), the Latin (1204�1261), and the Ottoman (1453�1922) empires. It was instrumental in the advancement of Christianity during Roman and Byzantine times, before the Ottomans conquered the city in 1453 and transformed it into an Islamic stronghold and the seat of the Ottoman Caliphate.

Istanbul's strategic position on the historic Silk Road, rail networks to Europe and the Middle East, and the only sea route between the Black Sea and the Mediterranean have produced a cosmopolitan populace, although less so since the establishment of the Turkish Republic in 1923. Overlooked for the new capital during the interwar period, the city has since regained much of its prominence. The population of the city has increased tenfold since the 1950s, as migrants from across Anatolia have moved in and city limits have expanded to accommodate them. Arts festivals were established at the end of the 20th century, and infrastructure improvements have produced a complex transportation network.

Approximately 11.6 million foreign visitors arrived in Istanbul in 2012, two years after it was named a European Capital of Culture, making the city the world's fifth-most-popular tourist destination. The city's biggest attraction is its historic center, partially listed as a UNESCO World Heritage Site, and its cultural and entertainment hub can be found across the city's natural harbor, the Golden Horn, in the Beyoğlu district. Considered a global city, Istanbul is one of the fastest-growing metropolitan economies in the world. It hosts the headquarters of many Turkish companies and media outlets and accounts for more than a quarter of the country's gross domestic product. Hoping to capitalize on its revitalization and rapid expansion, Istanbul bid for the Summer Olympics five times in twenty years.

Hagia Sophia (from the Greek: Ἁγία Σοφία, "Holy Wisdom"; Latin: Sancta Sophia or Sancta Sapientia; Turkish: Ayasofya) is a former Christian patriarchal basilica (church), later an imperial mosque, and now a museum (Ayasofya M�zesi) in Istanbul, Turkey. From the date of its construction in 537 until 1453, it served as a Greek Orthodox cathedral and seat of the Patriarch of Constantinople, except between 1204 and 1261, when it was converted to a Roman Catholic cathedral under the Latin Empire. The building was a mosque from 29 May 1453 until 1931. It was then secularized and opened as a museum on 1 February 1935.

The church was dedicated to the Wisdom of God, the Logos, the second person of the Holy Trinity, its patronal feast taking place on 25 December, the commemoration of the birth of the incarnation of the Logos in Christ. Although sometimes referred to as Sancta Sophia (as though it were named after Saint Sophia), sophia being the phonetic spelling in Latin of the Greek word for wisdom, its full name in Greek is Ναός τῆς Ἁγίας τοῦ Θεοῦ Σοφίας, "Shrine of the Holy Wisdom of God".

Famous in particular for its massive dome, it is considered the epitome of Byzantine architecture and is said to have "changed the history of architecture". It remained the world's largest cathedral for nearly a thousand years, until Seville Cathedral was completed in 1520. The current building was originally constructed as a church between 532 and 537 on the orders of the Byzantine Emperor Justinian I and was the third Church of the Holy Wisdom to occupy the site, the previous two having both been destroyed by rioters. It was designed by the Greek scientists Isidore of Miletus and Anthemius of Tralles.

The church contained a large collection of holy relics and featured, among other things, a 15-metre (49 ft) silver iconostasis. The focal point of the Eastern Orthodox Church for nearly one thousand years, the building witnessed the excommunication of Patriarch Michael I Cerularius on the part of Pope Leo IX in 1054, an act which is commonly considered the start of the Great Schism.

In 1453, Constantinople was conquered by the Ottoman Turks under Sultan Mehmed II, who ordered this main church of Orthodox Christianity converted into a mosque. By that point, the church had fallen into a state of disrepair. Nevertheless, the Christian cathedral made a strong impression on the new Ottoman rulers and they decided to convert it into a mosque. The bells, altar, iconostasis, and sacrificial vessels and other relics were removed and the mosaics depicting Jesus, his Mother Mary, Christian saints and angels were also removed or plastered over. Islamic features�such as the mihrab, minbar, and four minarets�were added. It remained a mosque until 1931, when it was closed to the public for four years. It was re-opened in 1935 as a museum by the Republic of Turkey. Hagia Sophia is currently (2014) the second-most visited museum in Turkey, attracting almost 3.3 million visitors annually.

From its initial conversion until the construction of the nearby Sultan Ahmed Mosque (Blue Mosque of Istanbul) in 1616, it was the principal mosque of Istanbul. The Hagia Sophia served as inspiration for many other Ottoman mosques, such as the Blue Mosque, the Şehzade Mosque, the S�leymaniye Mosque, the R�stem Pasha Mosque and the Kılı� Ali Paşa Mosque.'' ( wikipedia)

Congratulations on your recent sale!

Congratulations on your recent sale of this beautiful work!!

Well done on your most recent sale.

Thank you so much to the customer from from Los Altos, CA - United States who purchased a wonderful 60 cm Print of my Istanbul Abstract Cityscape textural impasto palette knife oil painting . Wish you to enjoy it for many years.

Thank you so much to the buyer from Reus, Tarragona - Spain.

Bravo on your latest sale.

Thank you so much to the buyer from Palmdale, CA - United States.

Wonderful vibrant work as always, congratulations on your sale!

Thank you very much, James.

Thank you very much to the buyer from Wayne, PA - United States.

Thank you so much to the buyer from Dubai, Dubai - United Arab Emirates for purchasing a gorgeous canvas print of my Istanbul painting.

Thank you all very much for your wonderful words about my Istanbul painting.