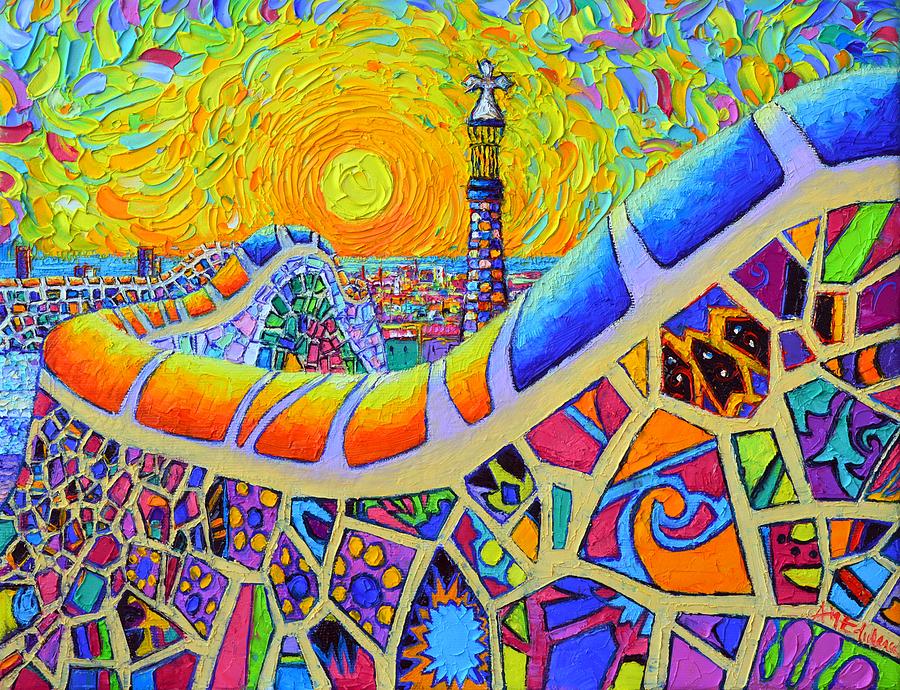 BARCELONA SUNRISE PARK GUELL is a impasto palette knife oil painting. I was inspired to paint this work by my travels to Barcelona( in 2010 and second time in autumn of 2017). Have so many great memories from this stunning city. One of the moments I'll never forget was when I saw the entire Barcelona panoramic view from Park Guell.

Continuing my series of Barcelona paintings with this work that presents the gorgeous view of Barcelona from Park Guell during the magical sunrise. In the foreground I painted the serpentine mosaic bench of Gaudi and in the distance the abstract city patterns and the large cross from Park Guell. In Barcelona even the houses look like a mosaic of Gaudi. Since I always have stylized my abstract cityscapes in a manner that remind of a colorful mosaic, in all my Barcelona paintings I used a stylistic analogy. In the background I abstracted the city that looks like a colorful mosaic pattern and replies aesthetically the mosaic of the serpentine bench of Gaudi painted in the foreground. In this work I focused more on the sinuous curves of the serpent bench.


''Park Guell (Catalan: Parc G�ell [ˈparɡ ˈɡweʎ]) is a garden complex with architectural elements situated on the hill of El Carmel in the Gracia district of Barcelona, Catalonia, Spain. It was designed by the Catalan architect Antoni Gaud� and built in the years 1900 to 1914. It has an extension of 17.18 ha (0.1718 km�), which makes it one of the largest architectural works in south Europe. It is part of the UNESCO World Heritage Site "Works of Antoni Gaudi".

Park Guell is skillfully designed and composed to bring the peace and calm that one would expect from a park. The buildings flanking the entrance, though very original and remarkable with fantastically shaped roofs with unusual pinnacles, fit in well with the use of the park as pleasure gardens and seem relatively inconspicuous in the landscape when one considers the flamboyance of other buildings designed by Gaudi.


The focal point of the park is the main terrace, surrounded by a long bench in the form of a sea serpent. The curves of the serpent bench form a number of enclaves, creating a more social atmosphere. Gaudi incorporated many motifs of Catalan nationalism, and elements from religious mysticism and ancient poetry, into the Park.
Roadways around the park to service the intended houses were designed by Gaud� as structures jutting out from the steep hillside or running on viaducts, with separate footpaths in arcades formed under these structures. This minimized the intrusion of the roads, and Gaud� designed them using local stone in a way that integrates them closely into the landscape. His structures echo natural forms, with columns like tree trunks supporting branching vaulting under the roadway, and the curves of vaulting and alignment of sloping columns designed in a similar way to his Church of Col�nia G�ell so that the inverted catenary arch shapes form perfect compression structures.

Original painting has been sold to a collector from Spain.

Congratulations on your well deserved sale.

Another masterpiece....bravo on your sale, Ana!

This is so happy, colourful and well composed Ana Maria....congrats on your brilliant sale, Wendy

Congratulations on your beautiful sale!

Congratulations on your sale of this wonderful artwork! Fl

I habve always wanted to visit their! Beautiful depiction! L/F

Your use of color is amazing Ana! I love how the wall draws my eye in towards the sun.

Outstanding again, the use of clours, texture and details with your unique style.

Absolutely beautiful painting Ana, the colors are stunning and so captivating!